The Beginnings of Taekwondo 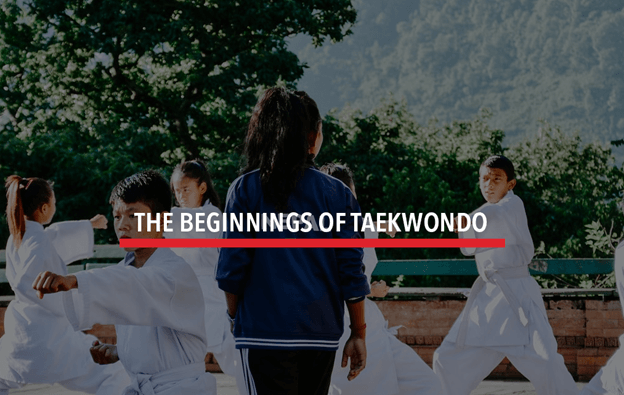 There are many legends and myths surrounding the origins of martial arts. This makes it difficult to pinpoint taekwondo’s date of creation. Taekwondo is believed to be created by three rival Korean kingdoms between 57 B.C. to 668 A.D. These three kingdoms were the Koguryo, Silla, and Baek Je. Each trained their men in a blend of martial arts styles to protect themselves from the opposing kingdoms. Subak emerged as the most popular combat style of this time. And its most well-known substyle was Taekkyeon.

Silla, being the weakest of the three kingdoms, decided to train a subset of its most skilled warriors to become incredible fighters. These warriors were known as the Hwarang and were given extensive amounts of education and training in the way of the Taekkyeon. This style of fighting used less legwork than those from Koguryo. Instead, it incorporated a variety of hand-based techniques.

Korean martial arts began to fade from existence during the Joseon Dynasty (1392-1910). This was largely due to the Confucist leaders who eliminated all non-scholarly practices. Taekkyeon was able to survive due to military practice and use.

Taekkyeon encountered more obstacles after the Japanese occupied Korea. The Japanese’s occupation of Korea during the early 20th century meant that Korean natives were forbidden from practicing martial arts of any kind. Miraculously, Taekkyeon survived. It was practiced in underground circles that continued to teach its techniques. During this time, Taekkyeon fighters became exposed to a variety of martial arts from Japan and China. For this reason, it is difficult to say how much of Taekkyeon was preserved in taekwondo.

After World War II, Japan ended its occupancy in Korea. Koreans were able to practice martial arts without restrictions. After the Japanese occupation of Korea, a number of kwans and styles emerged. To make things simpler, South Korean president Syngman Rhee declared that all versions of Taekkyeon must fall under taekwondo. It is on April 11, 1955, that taekwondo got its name and became a formal fighting style.

Taekwondo is now one of the most popular martial arts styles in the world. Martial arts classes can be found in almost every country imaginable. Since the year 2000, taekwondo has been a popular Olympic event.

In Oakville or Milton, it is uncommon to know the history of taekwondo. At Dragon Taekwondo, it is a priority for us to teach our students about the sport’s techniques and history. From our martial arts summer camp to our Dragon Taekwondo Academy, every student gets the opportunity to learn about taekwondo’s history and culture.

If you are interested in learning taekwondo, contact us now to learn more about our variety of offerings for you and your family. Dragon Taekwondo offers a variety of programs with flexible times for your busy schedule. This way, you can have free time before or after martial arts training. If you are considering registering your child for a class, we highly recommend our martial arts summer camp. Whether you are in Oakville or Milton, your child will be able to learn everything they need to know about taekwondo before and after martial arts training.