What is the Difference Between Karate and Taekwondo? 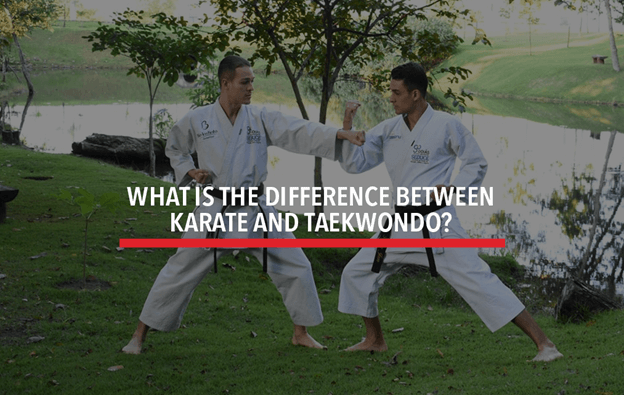 If you are new to martial arts or just started learning with Dragon Taekwondo, you may not know the difference between karate and taekwondo. Both of these sports are some of the most popular forms of martial arts in the world today. This is not only because of the self-defense aspect but also the physical and mental health benefits they provide. As of the 2021 Games in Tokyo, both will be Olympic Sports. While these are both ancient styles of fighting, each has its distinct differences in terms of competition, culture, and history. Here are a few of the similarities and differences between karate and taekwondo.

If you are a part of the Dragon Taekwondo Academy in Milton, it makes sense that you would be less familiar with karate’s fighting styles and origin. Karate is said to have originated in Okinawa, Japan, as much as 500 years ago. Over the years, karate has developed both Japanese and Chinese influences due to the close intertwining of the two cultures. If you were to learn Karate in Milton, you would find the same level of attention to discipline and patience as you would learning at Dragon Taekwondo. Martial arts, in general, tend to put a focus on the journey as opposed to the outcome.

The main difference between the two martial arts is fighting style. Karate has three distinct styles: Shuri-te, Naha-te, and Tomari-te. Each of these styles refers to the Okinawan city they were developed in. Te refers to the hand. This makes sense considering karate is a very hand dominant form of martial arts. Kicks are usually kept to a minimum and almost never exceed waist height.

Karate and taekwondo both use a belt system to indicate one’s level of expertise. If you joined our Dragon Taekwondo Academy in Milton, you would start at the lowest belt rank and work your way up. This can be a huge point of pride for many of our students. It is also a great way to recognize your accomplishments.

History is an important part of education at Dragon Taekwondo. We will often try to teach some of the history and culture surrounding taekwondo in addition to the moves themselves. Taekwondo is an ancient Korean fighting style that was developed over 2000 years ago. The close proximity of China and Japan has meant that taekwondo has developed a variety of styles and influences.

Unlike Karate, Taekwondo utilizes a lot of kicking. This is partially due to the scoring system enforced in certain Taekwondo competitions. In the Olympics, kicks are given a higher point value than punches. This encourages participants to use their legs over their hands. Though, at Dragon Taekwondo Academy in Milton, you will learn the full extent of the martial art and be able to defend yourself with your entire body, including punches.

Taekwondo isn’t just about learning how to defend yourself; it’s practicing self-discipline and learning to calm your mind and focus. Contact us today to learn more about what Dragon Taekwondo Academy in Milton has to offer.